I was on a train on my way to the Big Apple to play for the weekend.

I scanned the car for a seat and found one diagonally across a table from a man I’ll call Tom. He seemed like a good guy. He had stickers on his laptop that said he was a Buddhist and another that said something like “Be kinder than kind.” He was heavyset, friendly, and had a gentle way about him.

I had ended up, not by design, in the “Quiet” car. As I settled in to my seat, we made brief polite conversation, exchanged business cards, and were immediately shushed by a woman who had been sleeping.

Late in the ride, he motioned to me to give him my hands. Puzzled, I did.

He drew them toward him and started studying my palms.  I didn’t ask him to read my palms, and what’s more, he didn’t ask my permission to read my palms. And quite frankly, it drives me bananas when someone who sees themselves as a healer crosses my boundaries — without invitation or permission. Something about that seems incongruent and disrespectful.

I have been blessed and amazed by some of the gifted healers I’ve had the good fortune to meet in my life, and they are usually marked by a determined respect of personal boundaries. Their ego has been checked in service to  the greater good, and people open up to them because they feel safe doing so. But not so with Tom.

So here I was, somehow having agreed to giving this man my hands, surprised by his intent, and now uncomfortable.

And I do not take back my hands. I own this completely, and I find it fascinating.

Do you see the craziness in that? How I twist myself into a pretzel in an effort to prevent this stranger from feeling uncomfortable? Does anyone else do this or is it just me?

I love it when I can stand witness to my own crazy B.S. because ONLY then I can break free of it.

I won’t tell you what he said, but I’ll tell you that the few close friends I have told were in shock that anyone would say it, let alone someone who had not been invited to.

When he was done, I took my hands back and worked his words through my belief system. And I shut him out. He tried to make conversation about the book I was reading, and I said something vague to stop the conversation.

That’s the story of what I actually did.

Here’s what I wish I had done.

When he motioned for my hands, I wish I had asked him why. Then I could have said “No, thank you.”

When he pulled them toward him, and his intention was clear, I wish I had said “No, thank you.”

And if all else failed and I didn’t manage to make my boundaries clear at that point, I believe it would have been perfectly okay for me to get angry if that’s what I needed to do to enforce my boundaries.

We all have different lines between “nice” and “don’t mess with me.” Mine is apparently not clear enough yet, but it just got clearer.

I find it interesting that Tom sees himself as a Buddhist who is being “kinder than he needs to be.” It makes me wonder about areas in my life I might be blind to in which I think I’m doing good but may be doing harm. I bear him no ill will, and I do believe his intentions were good. But my experience was discomfort and then shock, and I opened myself up to that by not being clear about my boundaries.

I’m thankful for the experience — which gave me the opportunity to examine where I am letting people into my space who don’t belong there.

I wish I had done it differently, but I know I will the next time.

Here’s what to do with those hard emotions

6 of the Paths to Joy

This could get messy…how to handle Thanksgiving 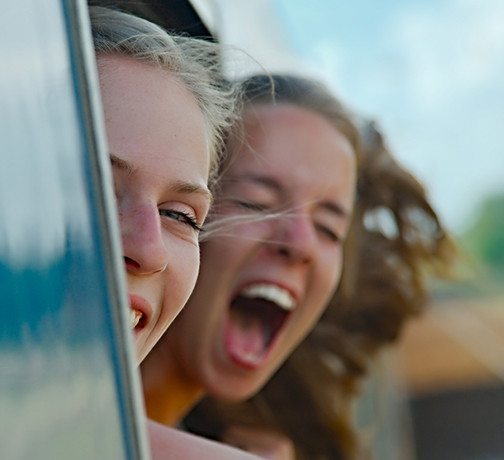 Discover the magic when you experience the
5 Habits Happy
People Have™.

Get all latest content delivered to your email a few times a month.